One of the biggest universities in Turkey, Gazi University, is continuing to make a name for itself with its successful academic units. Gazi University Faculty of Engineering is one of the leading faculties not only because its qualified academic staff and the education it provides but also in terms of the success of its graduates.  The dean Prof. Metin U leads the department. Salamcı who gave an interview to Gazi News about the Faculty said: ‘ Gazi University is one of the most significant universities whose name is recognized with science’

We are a faculty that deals with science

Dean Salamcı defined Gazi University Engineering Department as a faculty dealing with science.  Salamcı stated that the faculty has a very qualified academic staff and he emphasized that as a team instead of highlighting individuals, they are trying to bring the Engineering Faculty itself into the forefront. Prof. Dr. Metin U. Salamcı stated that with this vision, they are doing project works on TUBITAK powder Metallurgy’s layered manufacturing technology and they presented various studies on this field to TUBITAK and Ministry of Industry.

Metin U. Salamcı underlined the fact that Faculty of Engineering has undergone through a fast change in the past 1.5 years. Salamcı said that they adopt the idea of educating students who like to do research and their mission is not just graduate engineers. With this vision, in order to create a  research-based faculty, they are supporting their students  to do MAs and PHDs. Prof. Dr. Salamcı stated that most of their MA students work in places like TUBITAK.

Our students will get lessons from academicians from different countries

Prof. Dr. Metin U. Salamcı further continued his talk about the faculty and said: ‘ We aim to get together our students and academic staff with academicians from different countries. A lot of academicians from abroad will come to our faculty to teach. Moreover, we are increasing our international cooperation.

Dean Salamcı addressed to the students who want to study at their faculty and said: ‘ Students should prefer us because of our quality. According to METU’s URAP evaluation we are the third university.  Our faculty is much better that Bogazici University’s engineering department. We publish more academic essays compared to them and also our articles are much more cited. What puts us forward is our competent and qualified academic personnel and their academic articles and the citing that our articles get. Besides, if a student wants to serve the country with honesty and team work, he/she should choose our department. We promise our students to find jobs that are rewarding.

Metin U. Salamcı mentioned the importance of engineers as an engineering faculty which graduates engineers and stated that since engineering is behind of all human needs, humanity started with engineering. From this perspective, Prof. Dr. Salamcı explained that without engineers a country can not develop. He told ‘Countries such as Japan, France and Germany have come today thanks to their engineering.  Even Fatih Sultan Mehmet, who opened a new era, used his engineering to slide ships on ground by using sleds and make heavy metal balls and that’s how he conquered Istanbul.”

Salamcı mentioned that it has been realized that without engineers Turkey cannot develop and further stated: ‘The target of 500 billion exports has been set for 2023. At this point, the significance of engineers has been understood. It has been requested from scientific institutions in Turkey to produce technological products.’

Metin U. Salamcı stated that it is the engineering departments that lie behind all the leading universities in the world. ‘If a university and a country want to go further in the rank with patents, we need engineers.  Without engineers neither a country nor a university can flourish so we have to give importance to it. 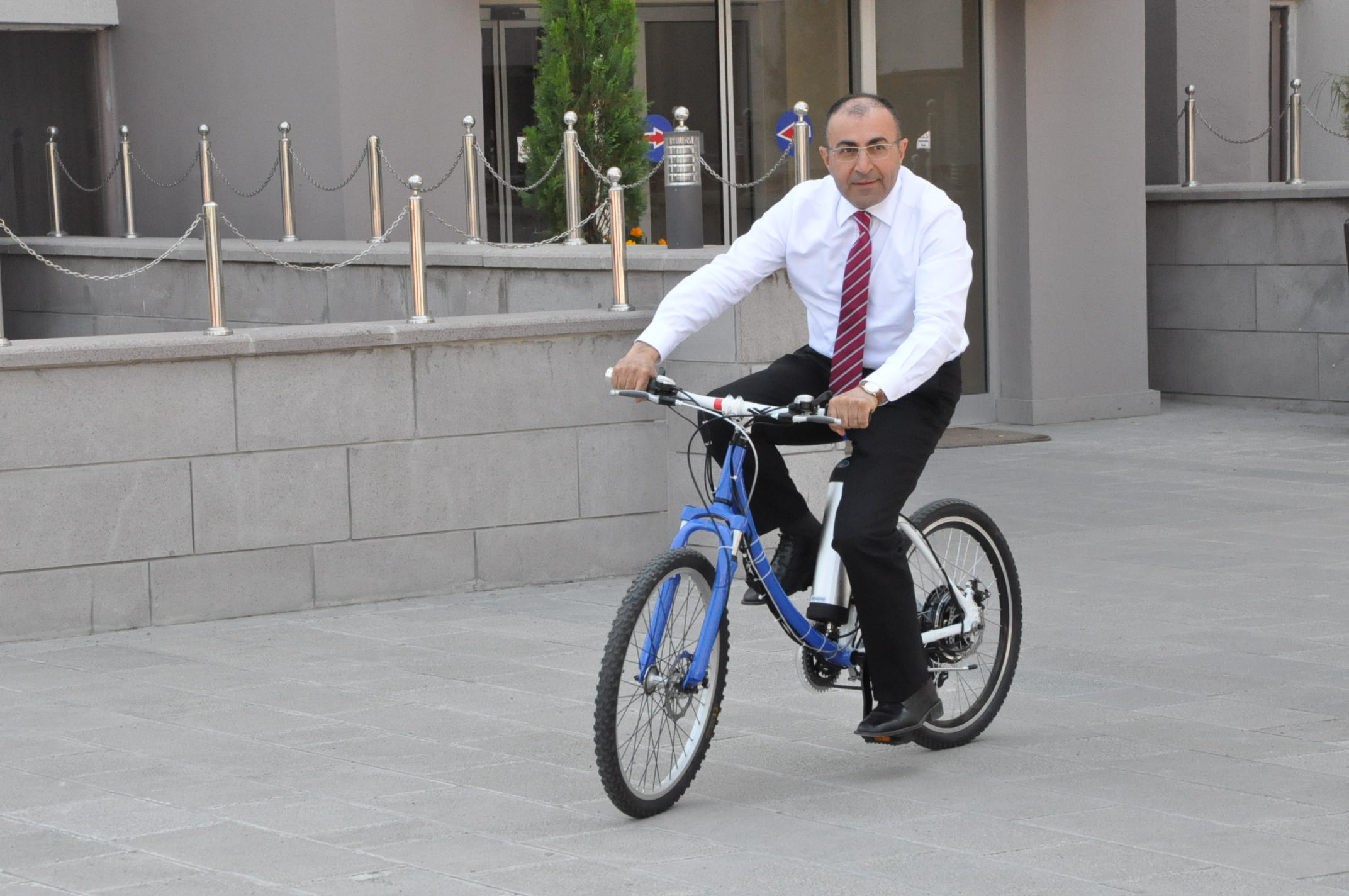 Metin U. Salamcı proudly mentioned the project of electric bike which was prepared by academicians and students. Salamcı took a ride with this bike in the faculty campus.

With the project of the electric bike, it is aimed to help solve the problems of air pollution and traffic congestion and also to encourage the use of electric bike. The bike can go by itself by its electric engine thanks to having a battery which charges itself whenever it is cycled. It has speed locking feature and with full charge, the bike can go 50kms. The project which is the result of the studies of 9 students and 6 academic personnel got support from TUBITAK 2241 A program.  Furthermore, the project got the first prize in graduation thesis competition which was held by Gazi University Technology Transfer Office.

"Our faculty’s name is recognized with science"